It was Santa, Not Osama!

(This post originally appeared in Socyberty on May 4, 2011. Socyberty was one of the websites owned by Triond, an online writing site that was active in online publishing around 2007 to 2013. On the same day, I wrote a short introduction about the Socyberty post right here in my blog. That intro provided a back link to that post at Socyberty. I took this down (or reverted to draft) when Triond's multiple sub-sites completely shut down in 2016. Who wants broken links, anyway?  Lately, I have started  retrieving my posts from Triond 's sub-sites through the Internet Archive: Wayback Machine so I can give them a new home.) 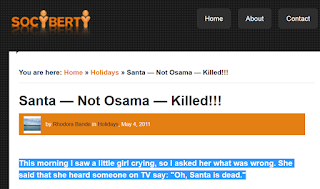 I tried to reassure the child that they were talking about someone else, not Santa, but she was not convinced. "He had the hat and beard — it was Santa!!!", she said most emphatically, and I began to wonder. Sure, the colors are different: gray-bearded Santa versus dark-bearded Osama, but maybe this little girl was on to something. Let's look at the facts, shall we?

Where does Santa live? That's easy — the North Pole, but has anyone ever seen or photographed Santa's place? No. Where might Santa be then? Who's to say that he wasn't hiding in a compound in Pakistan? Perhaps that's where he really lives and has his workshop. Who would suspect that? After all, Pakistanis don't even believe in Santa, do they?  What a perfect place to hide. Sure, he had to give himself a different look so people wouldn't recognize him — change hats, dye the beard, cultivate that "I'm a homeless guy" image. Maybe Santa's not even really fat? OK, overweight — let's be kind. Maybe it's all padding that he takes off when he's done with the once-a-year Santa gig.

Think of how devious al-Qaida must’ve been to come up with this plan — tricking US special forces into whacking the Claus, but you know, this kind of makes sense. They swoop in with helicopters, kill who they think is Osama, then get hit with the ugly truth. “Oh my God, we really screwed up! We just killed Santa Claus!” Well, they certainly can’t leave Santa’s body lying around, so off it goes into one of the choppers. Maybe the other chopper wasn’t even really blown up, but hit a flying reindeer and crashed. Where to dump the body so no one will find it? Why, the ocean of course.

If you look closely at the news reports coming out of Pakistan, you can see crying elves (no, I said elves, not Elvis – this article deals with facts, not fiction) in the background, wandering around aimlessly – asking for handouts now that they are unemployed. I think there was even a shot of an empty sleigh.  What does this mean for us? Well, maybe that little girl was right, and maybe she wasn’t. We’ll just have to wait till Christmas time to find out the truth, won’t we?