Waray Songs -- The Naughty and The Nonsense

"The Waray people were musically-inclined. They sang every day and stopped singing only when they were sick or when they were asleep." I read this in William Henry Scott's book titled Barangay: 16th Century Philippines.

Apparently, the modern-day Warays are very similar to their ancestors in that respect. Musically inclined, that is. Proof of this is the popular and the folk songs composed by the Waray people, many of which were sung and recorded by artists like Balinsasayaw Singers, Ms. Cielo Tibe, and Mabuhay Singers.

Aside from the love songs and the ones that made their way to the mainstream music scene are some other songs which up to this day remain undocumented. Go around Samar and Leyte and you will notice a lot of singing. You will likewise hear two types of Waray songs -- the naughty and the nonsense. Below are some of the songs with their lyrics. {This is Rated SPG (Strong Parental Guidance). You may read at your own risk.}

These songs are either senseless or replete with double meanings and are usually sung in informal gatherings or drinking sprees. The good thing is that you forget to dwell on the nonsensical and sometimes vulgar text and learn to enjoy the songs because of their melodies.

How old is Google? What about Yahoo? Which is older, Facebook or Friendster? Is there a way to know the age of your favorite website?

There are two sites that give ready answers to these questions. SEOlogs.com (www.seologs.com) determines the approximate domain age of a site once a URL is submitted to its Domain Age Check Tool. Here's what I gathered: Google's domain was created on September 15, 1997; Yahoo, on January 18, 1995. As of March 31, 2012, Google's approximate age is 14 years and 6 months old. Yahoo's approximate age, on the other hand, is 17 years, 2 months and 11 days old.

According to the same tool, Facebook is older than Friendster by 5 years (see information below). Notice that SEOlogs uses the word 'approximately'. It's because most websites don't immediately buy their own domain names during inception phase. Some webmasters use free webhosting sites before fully launching their own sites to the public. Hence, there's a big chance that most of these sites are older than their actual domain age.

Below are some popular sites and the dates their domain names were registered.

There's another site that determines the domain age of a website. It's called URL APPRAISAL (www.urlappraisal.net). If you own a blog, you might find this tool very useful. Not only does it tell you about domain age, but it also gives an estimate of a site's value. As of March 31, 2012, Yahoo's estimated site worth is $41,726.30; Google's, $34,293.54. 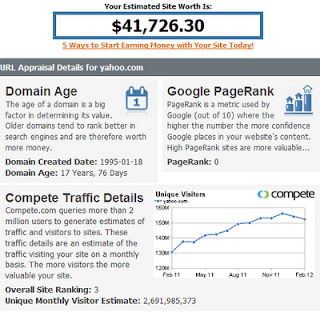 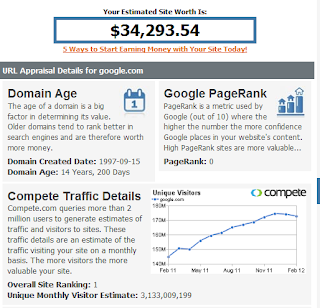 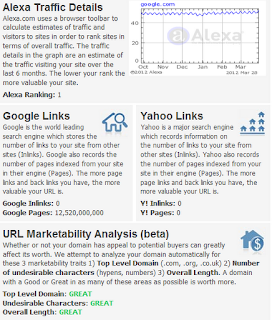 If there's any information that's not accurately given by URL Appraisal, it's the Google PageRank (all websites are ranked 0/10, according to this tool). Other information provided by the website are: Compete Traffic Details, Alexa Traffic Details, Google and Yahoo Links, and the URL Marketability Analysis.

The two sites give different dates for Twitter's domain age. I'm placing here the screenshots of the results given by the two sites.

Twitter's domain age according to www.urlappraisal.net: 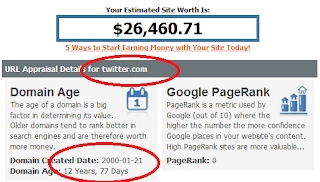 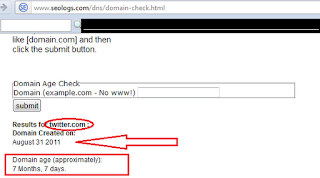