The Other Meaning of Kubkob 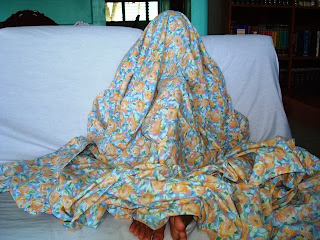 Today, 28 October 2013, I will exercise my right to suffrage. Like many Filipinos, I still believe that any electoral process can do wonders for this country.  I have always claimed that right -- to choose the leaders who I think are capable, qualified, and committed to serve their constituents -- since I turned 18. However, this is not the only reason why I always look forward to the Election Day. There is one aspect of elections that has piqued my interest since the day I was able to vote: the Waray vocabulary associated with elections. Number one on my list is the word kubkob.

No Country For Old Women -- A Film Review

Never before has the double standard that exists for aging men versus aging women been exemplified so well as in the film "No Country for Old Women." This avant-garde cinema masterpiece follows the love lives of 24 celebrities - twelve men and twelve women. Their respective spouses/significant others are shown chronologically side by side, and interviews with "the man on the street" are shown to support the biases inherent in this gender-based double standard.

As the male celebrities transition into middle age and beyond, they become "suave and debonair," while the female celebrities of the same ages are considered "obscene" or "crazies in full blown clown make up," with their significant others being gigolos of course. The older male celebs were excused for having younger women than themselves because "hey, they're guys, right? It's expected."

Apparently, major film studios have shunned having anything to do with this movie due not only to the controversial nature of the film's content, but fearing the ensuing litigation from the famous celebrities themselves when they see the contexts in which they are presented. You will be shocked speechless when you see what celebrities were used for this film!

Obviously, the film's financing was done privately, hence the "very limited showing," so don't bother trying to find it on IMDB, but if you ever get the chance to see this film, do so. You'll laugh so hard that you might just pee your pants!!!