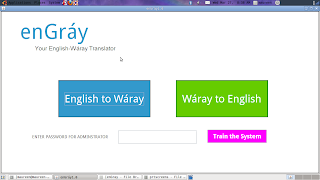 Finally, there's this machine translator called enGráy (short for English-Waráy) that translates Waray sentences to English and vice-versa. I was able to try it and I was happy with what I discovered: enGráy works like Google Translate. The good thing about enGráy is that it is specific to the Waray language --  something that Google Translate cannot do at present.

What to Expect at a Waray Social Gathering


Never attend a Waray gathering if you're not ready to perform the Kuratsa, a traditional Filipino dance of courtship. This is something that every Waray understands. Some even think that it is an insult if a visitor is not requested to dance the Kuratsa during a fiesta celebration or during a wedding.